Spazzarini Construction was founded in 1921 as a small trucking company by Antonio Spazzarini. Antonio migrated to the United States in 1907 in pursuit of establishing a better life for his family. In the 1950’s, Anthony Spazzarini continued the “American Dream” that his grandfather had started by following the same recipe for success…hard work and an honest reputation.

Anthony soon developed his trucking business into a small contracting business serving various public and private clients. In the late 1970’s and early 1980’s Anthony initiated his two sons, Edward, and Mark into his business. The Spazzarini legacy has continued to grow in the competent hands of Edward and Mark. Their keen insight and business acumen have enabled them to build Spazzarini Construction Co., LLC into a multi-million dollar contracting firm that enjoys the status as one of the premier road and site contractors in Connecticut.

In 2010 Mark’s two sons, Brian and Dan were introduced into the company. Starting on the labor force and learning from Mark and Edward, both individuals have grown and developed Spazzarini Construction into the modern construction firm that continually completes quality work we are known for.

Spazzarini Construction Co., LLC is structured with highly qualified superintendents and foremen on all projects, the majority of whom have been with the company for greater than ten years and many of which are approaching 20 years. With these key people in place and guidance from Mark, Spazzarini Construction Co., LLC can complete projects with tight time schedules and uphold the standard of quality that it is renowned for. 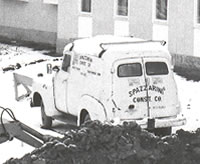